Sawadee Kha! I know many of you will be getting ready to celebrate Christmas, but in Thailand we recently had a very different kind of celebration.

Loi Krathong is one of the main holidays in Thailand. Loi means ‘to float’ and krathong is the name of the beautifully-decorated vessels. The Loi Krathong festival is a celebration of letting go of the past and making a fresh start.

I have seen krathongs for sale in Thailand before but never had the chance to make one, so thought I would share with you all what a krathong is!

To begin making our krathongs, my sisters went behind our house to cut down a banana tree. Sunny ran after them, until his Ya (paternal Grandmother) called after him in Thai, ‘Come back, there are too many mosquitoes back there!’.

A section of the banana tree trunk forms the floating base of the krathong. I was very grateful to my sisters for braving the mosquitoes to get these!

Banana leaves are then cut and folded into pointed shapes and attached to the base with pins.

Next is my favourite part; decorating the krathong with flowers! Luckily we had plenty in our (and our neighbour’s) gardens. 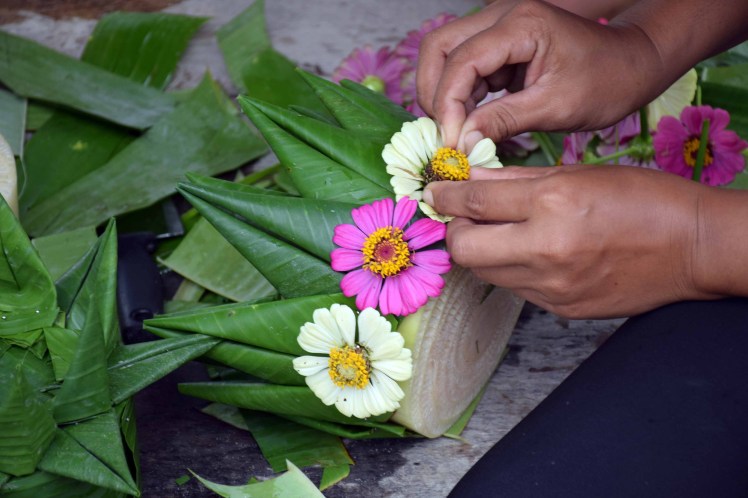 After the krathongs are decorated it’s time to add the final touches.

Incense and a candle are stuck into the top. Each person then adds a small lock of hair and nail clipping into their krathong to represent letting go of bad things from the past. A coin is also added to represent bringing wealth and to increase merit.

The night of Loi Krathong we walked from our cousin’s house to my parents-in-law’s by the light of the full moon. It was drizzling rain, so my husband and I held an umbrella to shelter baby Boo, while Sunny and his cousins ran excitedly ahead, clutching their krathongs.

When we arrived, I took Boo inside as it was too wet for him.

My husband took the children across the road to put their krathongs in the water.

In many towns and cities there is usually a big Loi Krathong celebration. Everyone floats their krathongs together which is amazingly beautiful.

In our small village it was too far to go to anywhere by motorbike at night though, so our little river was the next best thing.

Down the muddy banks they went, pulling at shoes that were quickly sinking. A flick of a lighter on the candles and off the krathongs sailed into the night; glowing vessels filled with wishes and a new start.

Maybe you could try making your own krathong at home! It could be made of anything that floats: a leaf, a seed pod, a branch, flowers. Light a candle and make a wish for a new start.