Today was my second day at The 3rd Asia Oceania Regional IBBY Congress at TK Park in Bangkok.

What an inspiring day!

Four parallel sessions ran with talks on many subjects focusing on children’s books. I wish I could have cloned myself to attend every session! However, I am but one person so did what I could.

One speaker I was especially inspired by was Patricia Heyberger, ATD Fourth World Regional Delegate for Asia. Her passion is creating street libraries as cultural outreach.

What is a street library you may wonder?

Basically, it’s a library without walls. This can come in many different forms; from mobile buses, karts, boats, or even something as simple as a basket of books.

In fact, Heyberger spoke of a street library in Africa called “Library Under the Street Lamps”, in which children living on the street are read books under the street lamps at night. Even just one book is enough to create a gathering and capture the children’s imaginations. This one book can be read, discussed, and expanded on through activities. Powerful, huh?

“People in poverty have just as much need for culture as they do for bread. Knowledge isn’t a privilege, it’s a right.”   – Joseph Wresinski

Street libraries create a sense of value to neighborhoods where people live on the streets, in slums or cemeteries. It can make children feel better about where they live.

As well as books, street libraries can involve computers, art, craft and music.

The art-library has helped me communicate with other people. My personal point of view is that art, music and painting can destroy poverty, because as far as I am concerned all that beauty gives me a lot of extra strength with which to fight.”      -Mrs D (living in a low income housing project, France).

Our task is not to solve these families’ problems, but rather to give them back their privileges and their rights.”    -Joseph Wresinski

Another great presentation was by Dr Tatsanai Wongpiethkul and Ms Rapeepan Pattanawech, who spoke of diversity through picture books. They shared a series of children’s picture books published by TK Park, which focus on the different regions of Thailand. These books explore local food, places and culture.

It is vital for all children (no matter where they live in the world), to have books that reflect them and which children can identify with. This can help to continue traditions, celebrate cultural identity, as well as create a sense of belonging.

There was a great display of children’s books from all over Asia and the Oceanic Regions. 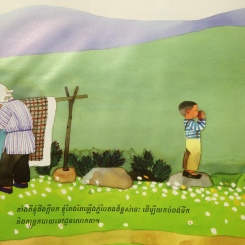 The day finished off with a cultural night. As we ate dinner, we watched one of the most amazing performances I have seen in Thailand; fusing drumming, Muay Thai and traditional Thai dancing.

Then we heard tales told by storytellers from China and India, followed by impromptu stories from people in the audience, including Jenni Woodroffe from my home country, Australia!

Finally, the Thai dancers came back and we all danced together around the room; a tumble of hands, colourful clothing and laughter.

Want to know more? You can read about my first day at The 3rd Asia Oceania Regional IBBY Congress here.

Credit: The fabulous feature image for this post is by writer and illustrator Soko Jinsaki. I encourage you to check out her work!

This opportunity was thanks to my New Colombo Plan Scholarship from the Department of Foreign Affairs and Trade, Australia.

One thought on “Empowering Communities through Books: Day 2 of The 3rd Asia Oceania Regional IBBY Congress”